The problem with booking a guided walk during winter is you’re never sure what the weather might bring. The walks below all include an option to spend some of time being guided in a museum if the weather turns out to be too wet or cold.

VICTORIAN KENSINGTON:
This is the most sheltered of all our winter walks. We walk around Albertoplis, where the Great Exhibition took place, and where the V & A, Science and Natural History museums and the Royal Albert Hall are located. We pop into the V&A to show you the world’s first and, still to this day, probably most beautiful museum cafe in the world. We can stop for a cuppa while we take in the beautiful surrounds if you wish. We can also guide you round some exhibits here, or if you prefer seeing The Rocket or a T-Rex to a Rodin, we can pop in the science or natural history museum too. And all these museums are linked by underground walkway so we spend very little time out in the elements. But if it’s a lovely day we can change the itinerary and take you into pretty Hyde Park and show you Rotten Row.

TALENTED WOMEN IN THE NATIONAL PORTRAIT GALLERY:
We start with a short walk in the Trafalgar Square area, where you are shown memorials to Florence Nightingale and Nurse Edith Cavell, and are told their stories. Then it’s into the gallery. The ground floor, which concentrates on late 20th and 21st century, is by far the most crowded section, so we’ll take you up the escalator to the uncrowded upper floor to show you paintings of great women of the earlier 20th, 19th and previous centuries. And we will concentrate on women who have been painted as a result of their great talent rather than simply being born to high office. If there are any women in particular you would like us to cover, just let us know. Here are some examples of talented women we can tell you about who have their portrait in the gallery:
The Bronte Sisters, Amy Johnson, the Pankhursts, Florence Nightingale, Mary Seacole, Elizabeth Barrett Browning, Ellen Terry, Mary Shelley, Mary Wollstonencraft, Vanessa Bell, Jenny Lind, Odette, Edith Evans.

HISTORIC GREENWICH including PAINTED HALL & NATIONAL MARITIME MUSEUM:
This is certainly our most beautiful winter walk. We’ll see the spectacular historic buildings of the Old Royal Naval College and enter the Painted Hall which has one of the greatest painted ceilings in the world and was where Nelson’s body lay in state after Trafalgar. We’ll also pop in the beautiful Chapel. Then it’s a nice stroll along the river to see historic pubs and old almshouses before going in to the National Maritime Museum. If weather permits we can also stroll in Greenwich Park to take in wonderful views of London from alongside the Prime Meridian and Royal Observatory. There’s also Tudor history to tell you about and Greenwich was also an Olympic site and we’ll tell you how it managed the event. And if you’re a film fan you’ll be seeing places that may seem familiar, as these wonderful old buildings are often used in films, e.g. Les Miserables. 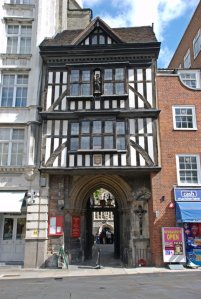 SMITHFIELD, ST BARTS & MUSEUM of LONDON: This walk packs in a huge amount of history in a small area. We start in medieval Smithfield, with London’s only remaining priory. We cross over old cobbles to London’s historic indoor meat market to take in its amazing architecture and hear its story. We then see lots of London’s oldest things – oldest church, house, hospital. And we see the greatest piece of a particular style of architecture in Britain and you’ll hear why it’s in such amazing condition. Then we pass through perhaps London’s most interesting small park, which is crammed with history, en-route to the Museum of London. Here we’ll offer you a choice of things to be shown around, from Romans to Suffragettes to the Blitz.

OLD LIMEHOUSE & MUSEUM OF DOCKLANDS:
We start by seeing a charming square full of immaculate Victorian cottages. We also see where a famous Hollywood director lived as a boy, before seeing perhaps the prettiest church and grounds in the East End. Then it’s time to head down a pretty canal which empties out beneath the oldest railway viaduct in the world, still is use to day. We stroll round a beautiful boat basin to see charming Georgian Limehouse, where we can stop off at one of London’s oldest and most charming and historic riverside pubs if you fancy a quick one. Then it’s on to one of our favourite museums, where we offer you a choice of things to be guided around.