Jack the Ripper walks around Spitalfields/Whitechapel/the City are frankly no longer worth doing unless you enjoy walking round building sites. The area in which all but one of the murders took place is now a sea of construction, with nothing left to see from Victorian times. It’s preferable to do a walk around the still atmospheric, interesting, creepy old parts of Whitechapel and St Georges in the East, a world away from modern day gentrification, skyscrapers and Crossrail.

And rather than concentrate solely on Jack the Ripper, you see where other Victorian murders, a famous riot, an infamous siege and the pub where a Kray murder all took place (see the photo below – the mess on the floor ain’t beer!). 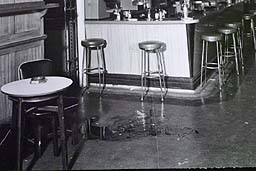 You start by seeing the only building remaining from the Ripper murders, aptly located in a graveyard which coincidentally also has a link to Britain’s most famous pre Ripper murders, the Ratcliffe Highway killings which took place just yards away. You then head through an area of old warehouses, dark railway arches and cobbled streets to see where poor Long Liz Stride was murdered by the Ripper. En route you also see a huge, amazing wall mural telling the story of the Battle of Cable Street. You then see where two other, famous at the time, horrible murders took place in Victorian times en-route to seeing where the Sidney Street Siege took place. And a stone’s throw away is where Ronnie Kray committed an infamous killing. As well as seeing all the sights and being told all the details, you are also show lots of great photographs that bring the streets of old Whitechapel back to life.