1889: It wasn’t just men who were hampering suffragists. In 1889 an appeal against women’s suffrage was signed by 104 well known society women. These included Beatrice Potter (later Webb), the great Fabian; Mrs Leslie Stephen, mother of Virginia Woolf and Vanessa Bell; and Mrs Herbert Asquith, the wife of the future Prime Minister. 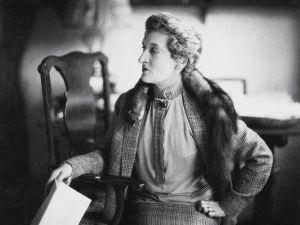 It is perhaps surprising such women, who had received the benefits of a good education and who were all active in  furthering female education, were against women’s suffrage. Stephen & Asquith did not like the idea of women outside of their circle, who they believed were less intelligent than they, gaining the vote. And this intellectual snobbery was not the only one involved. These women were also horrified by the idea of mere lower middle class, or worst still working class, women gaining the vote. This would change the world irrevocably. These women were content with the privileged world in which they lived. Beatrice Potter’s reasons were different, she believing at the time (she later changed her stance to a feminist one) that the women’s question was a distraction from the real cause, which was that of labour.

Suffragists still had a long way to go.