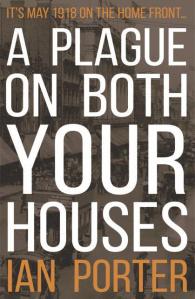 Ian Porter’s latest novel, A Plague On Both Your Houses, is published. It’s set in the East Ends of London and Berlin during the final months of the Great War, and the months thereafter. The title refers to the ‘Spanish’ Flu pandemic which is raging throughout the story.

The London section of the novel, starts four years on from the end of Porter’s previous novel, Suffragette Autumn Women’s Spring. It’s now 1918 and we’re again in Bow, with the heroine and hero of the Suffragette story, Ruby and Nashey, continuing their battles against the British government. The Vote for Women has just been won, but now they are anti-war protesters.

And in Berlin, there are others with similar problems.