The first walk takes place in Westminster. Much of the Suffragettes’ fight for “Votes for Women,” took place here. You are shown where it all happened, amidst some of London’s most famous landmarks including Trafalgar Square, Downing Street, Whitehall & the Houses of Parliament. You also see large number of photographs from the times, which bring the streets of Edwardian London to life. You hear all about the big events and major characters involved. Brave women, scheming politicians, great marches & speeches, violence, arson, prison, force feeding, the Pankhursts, Asquith, Churchill, it’s all here. You also hear a shocking, unknown story about Mr Churchill’s views on women gaining the vote, and you find out how and why women finally won the vote.

Start: Trafalgar Square
Finish: Mrs Pankhurst’s statue next to the Houses of Parliament 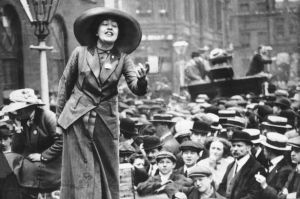 The second walk shows you where Sylvia Pankhurst and her East London Federation of Suffragettes fought for Votes for Women from 1912 to 1914. You see the police stations where Sylvia and her women often ended up; the places where rousing speeches were delivered; where supporters thwarted the police; where women were beaten up. You also see where, during the Great War, Sylvia ran a nursery, toy factory and restaurant for the poor. There’s also a memorial to Minnie Lansbury, a Suffragette who became a local councillor who fought for a fairer rates system and won a great victory but died for her beliefs. You also see the hall and nursery ran by the Lester Sisters, philanthropic Suffragist sympathisers, who helped the poor and brought Gandhi to visit and stay with them in Bow. And there’s the infamous Bryant and May matchbox factory, still here today, where its employees, with the help of reformer Annie Besant, fought for better conditions and won the first ever victory of a women’s trade union. You also pop into beautiful Victoria Park so see where Eleanor Marx used to speak and where a fountain is located which was provided by a woman who was Victorian times’ greatest unsung heroine. And it’s explained why such natural leaders such as Annie Besant and Eleanor Marx were not there to lead the women’s movement at the start of the 20th century.