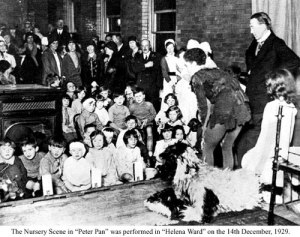 On our Kids Stuff walking tour we twist through interesting little alleys to see a clock that ran by water, and the closest thing to a maze in central London. We  see where ballet students dream of becoming ballerinas, and then it’s on to where the first Punch & Judy was performed; now a great spot to see street entertainers. We see the place which inspired Diagon Alley before getting a tube to see a famous children’s hospital and its Peter Pan statue. You hear about children in Oliver Twist’s time, see old schools and pass a special playground.  We then look for Foundlings’ tokens before heading for Harry Potter’s railway station where you (almost) disappear into the wall on platform 9 and threequarters.

See where pirates were hanged; an old pub where condemned pirates were allowed to have their last pint of beer; a pirate ship in dry dock; a huge dock wall which kept the cargo in and dodgy characters out. And there’s stuff about the jolly roger; pistols and cutlasses; how to board a ship; how ships navigated; “learning the ropes” and “swinging the lead”; buried treasure; the pirates’ code; pieces of eight and other booty; weevils, rats and maggots; wooden legs and eye patches; pet parrots and monkeys; personal hygiene (lack of!); walking the plank; and Blackbeard’s beard – a fearsome thing to behold. And as well as pirate stuff, we walk past some Mutiny on the Bounty history too.