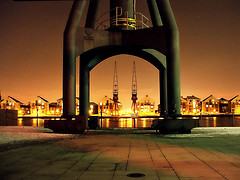 You start in Silvertown, seeing an Olympics 2012 white elephant and also see the site of a devastating World War 1 explosion. You also get a great view of the Thames Barrier before walking along an enormous dock to see a gigantic exhibition centre and Olympic venue, a huge abandoned mill plus some massive dock cranes (see photo). You then have to choose between taking the Emirates Cable-Car for a scenic ride over the river to the 02 Arena; or take the DLR to see the only lighthouse on the Thames, a lighthouse ship and views of the O2 Arena.

The Blitz Walk: You start by seeing where a V2 rocket destroyed a market and left shrapnel markets still there today. And you get to compare a remarkable elevated view of London today with a photograph taken from almost the same spot during the Blitz. You also see London’s most unusual house which came about from WW2 bombing. There’s Bow Bells and other churches that were affected. And just how did St Paul’s miraculously survive the bombing? You’ll walk past a fine memorial to heroes that gives a clue to the answer. You also see how censorship was used and how life carried on regardless. You’ll also hear of underground shelters, the black market, rationing, evacuation, doodlebugs and other elements of London’s war.

Swinging ’60’s Walk: This is a walk through the  interesting Soho area, which was the centre of the Swinging 60’s scene. Here you’ll see numerous locations associated with the Beatles, Bowie, the Stones, Hendrix, Rod, Bolan, the Kinks, Tommy Steele, Adam Faith, Cliff and many more, with loads of photographs of them back then too. You’ll also walk past where Paul met Linda and see where John met Yoko; a great guitar street, and clubs, coffee bars and a studio where stars of the future hung out, performed and got discovered.

There are also other walking tours such as Suffragettes, Women in World War 1 and various walks themed around TV series, that are also 20th century of course.