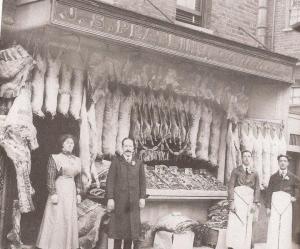 The walk starts in the late 17th century with the Hugenots. Streets with names such as Fleur de Lis and Fournier hint at the French history in the area. There are beautiful near 300 year old silk weavers’ houses to see, but also other fine, substantial buildings, all of which were originally Hugenot churches that have changed usage several times over the years and are still doing a great job. You’ll see the beautiful house where the leading textile designer of the time lived and worked. There is also a sun dial, a fire insurance plaque, a shop and other features that are three centuries old. You then pass through the 19th century of Jewish synagogues, tailors, a soup kitchen, a night shelter and a bath house. Then you head back to the story of German settlement in the 18th century, with a fine church and school from the period. You then walk into the dark world underneath the railway arches, where Irish people came to work and live in the 19th century. Then it’s back a century to where wealthy Swedish merchants lived. You finish at a great tribute to the cosmopolitan East End, when immigrants of all races and religions came together to say ‘they shall not pass’ – the beautiful mural depicting the events of the Battle of Cable Street in the 1930’s.