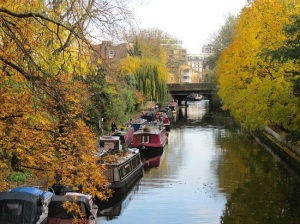 This is one of London’s prettiest and leafiest walks, though you wouldn’t think so where you start. But one moment you’re in the hustle and bustle of the Angel, and the next you’re in the cutest of pretty, leafy, quiet Georgian streets where Boris lived till recently. You see a beautiful stretch of canal before heading past an impressive Victorian building that’s been converted to into modern day usage. You then see the ‘coffee culture’ of a trendy passageway and antiques market before heading on to the old centre of Islington, which is steeped in interesting 18th, 19th and 20th century history. Now it’s time to see the first of several amazing squares and crescents, many of them Georgian, each one with its own history and interest including my favourite, which is a quite unique mock gothic brick and stone affair. You also see where Tony Blair used to live and a street whose architects appear to have been fascinated with ancient Egypt. There are sphinxes outside every house!