The new statue of Millicent Garrett Fawcett, the president of the largest of the suffrage societies to fight for Votes for Women 100 years ago, is a beautiful piece of art. And around its base are photographs and names to commemorate the other leading lights in the campaign (including both Suffragettes and Suffragists). But there’s one strange omission. Millicent’s older sister, Elizabeth is not there. 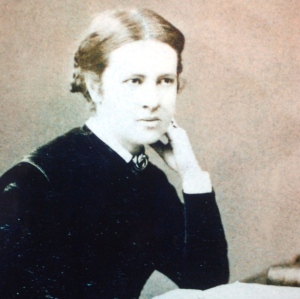 Elizabeth was a leading member of the Kensington Society, members of which in 1866 asked MP John Stuart Mill to put forward an amendment to the Reform Act which was to be put before parliament. It was to give propertied men the vote. The amendment was to ask for the vote for propertied women too. Mill agreed to do this if the Society could produce 100 signatures on a petition. It was Elizabeth Garrett’s drawing room which was used to organise the petition. The first Votes for Women organisation had essentially began. 1200 signatures were collected and it was Elizabeth (photographed here), along with her friend Emily Davies (later co-founder of Girton College Cambridge for women) who took the huge roll to Mill in the House. The rest is history.

And 6 years earlier, it was Elizabeth who had told her 13 year old little sister Millie, that she herself would fight for women in medicine and when she was old enough Millie should attend to gaining the vote for women. Elizabeth became famous, as the UK’s first officially recognised woman doctor. And soon afterwards she married and became Elizabeth Garrett Anderson.

Surely this important woman in women’s history should be on her sister’s statue?