The Jack the Ripper Walk is London’s most well known walking tour, but there are lots of other Victorian history walks one can do. Here are 5 of them:

Dickens & Oliver Twist Walk: Walking was one of Dickens’ great pleasures in life. If he had writers’ block, he might walk all night through the streets of London for ideas. Follow in his footsteps. Walk where the young Dickens walked before he was a writer and see where he used to work as a clerk. He moved home a lot – you’ll hear why and see several of the places where he lived. You’ll hear of how he moved up in the world and  made it big, drawing inspiration from the area you’re walking around, using many locations in scenes in his books, in particular Oliver Twist. So you’ll see where Fagin’s Den was set, Bill, Nancy & Bullseye’s local, and where the Dodger showed Oliver how to pick a pocket or two. You’ll also see existing evidence of Dickens’ philanthropy and there’s some great photographs of Dickensian London too.

Old Borough, Bermondsey & Rotherhithe Walk: You start in the Borough seeing London’s best collection of 19th century architecture with everything from tenements and cottages built for the Victorian poor to  old factories and an impressive Exchange building. You also see a tribute to a legendary medieval graveyard and hear how one of the world’s most successful gambles built a great hospital. You walk on through old Bermondsey, where many of its fine warehouses and great leather & wool exchanges are still there today, and also come across the first pie & mash shop. You then head to the river to see where Bill Sikes got his come uppence before finishing in historic, pretty Rotherhithe village complete with Mayflower, Brunel and bodysnatching history. 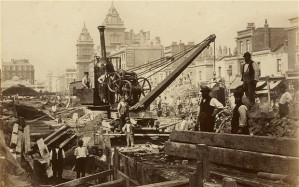 The Coming of the Railways Walk: You start at London’s first railway terminus and railway line, then it’s on to the world’s first tunnel to be constructed under a river. You see some of the tunnel as you disappear down into it to get an Overground train through it. This takes you to the world’s oldest railway aqueduct, which is part of London’s second oldest railway line, still in use today. You see charming 1840’s railwaymen’s cottages nearby and hear why the railway was important in Victorian philanthropy. At two of the modern stations you travel through you see how some of the oldest stations have been used as foundations for modern ones. You then travel to an underground station, still looking pretty much as it did 150 years ago, when it was a station on the world’s first underground line. 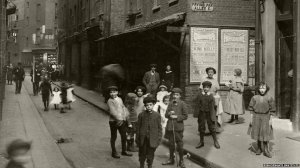 Whitechapel Without Jack the Ripper: There is so much more to Whitechapel and Spitalfields than a Victorian maniac’s reign of terror. This walk covers centuries, from seafaring connections to 21st century street art; from the oldest manufacturing company in the country to multi million pound luxury pads in old silk weavers’ houses. You also see and hear about the early industrial revolution, Jewish & Irish East End settlement, the meeting in Whitechapel of two very famous Communists and see where one of them stayed; the London Hospital, the Elephant Man, the Sidney Street Siege, the work of both William & Charles Booth and other reformers & philanthropists; Toynbee Hall, Arnold Circus and the Old Nichol of A Child of the Jago. You’ll also see the old tenement where one of this country’s most wealthy self-made men was brought up.

Workhouses & Dr Barnardo’s Walk: You see the house where Dr Barnardo was living when he first spotted the problems around him. Just yards away is a fine example of a Victorian workhouse, and where two other workhouses were near neighbours. You walk through an historic old cemetery en-route to a canal towpath that takes us to the Ragged School Museum which was a Barnardo’s. Nearby you walk past the spot where Barnardo set up his first School, and also pass by the remains of yet another workhouse. There’s also other interesting history en route, before you see where a famous doctor worked in a hospital for the poor at the same time as Barnardo set up his first Home nearby.