Keen Walkers’ “Country ” Walk: Our other walking tours have roughly a 40% walking, 60% looking & listening ratio, i.e. on a 2 and a half hour walk you’ll spend about an hour actually walking. But this walk is for keen walkers who want to spend a higher proportion of the tour actually walking. And keen walkers often like to get away from the crowds, get plenty of fresh air and see countryside, views, waterways etc. So this walk takes in a large ecological park, various scenic rivers, canals and basins; two charming quiet old off-the-beaten-track villages, beautiful views, nice old architecture and some quaint old pubs and cafes. This is our longest walk.

Dickens’ Rochester Walk: Dickens lived nearby as a boy, moved back to the area later in life and died here. His final, unfinished, novel the Mystery of Edwin Drood was set in charming Rochester. You walk past many of the places featured in Edwin Drood as well as many other things you’ll like if you have Great Expectations of Rochester; Miss Haversham’s house; the Guildhall where Pip was articled to Joe Gargery; and a museum (free) with a part reconstruction of a prison hulk so you’ll be able to puzzle at how Magwitch escaped. You’ll also see the chalet in which Dickens wrote some of his final novels. Rochester also has one of the loveliest cathedrals in Britain, a fine ruined castle and plenty of other interesting history.

Old Borough, Bermondsey & Rotherhithe Walk: You start in the Borough seeing London’s best collection of 19th century architecture with everything from tenements and cottages built for the Victorian poor to old factories and an impressive Exchange building. You also see a tribute to a legendary medieval graveyard and hear how one of the world’s most successful gambles built a great hospital. You walk on through old Bermondsey, where many of its fine warehouses and great leather & wool exchanges are still there today, and also come across the first pie & mash shop still going today. You then head to the river to see where Bill Sikes got his come uppence before finishing in historic, pretty Rotherhithe village, complete with Mayflower, Brunel and bodysnatching history.

The Thames & Its Canals, Basins & Creeks: This walking tour takes place in East London, either side of the Thames’ notable bulge. Not surprisingly it’s a very scenic walk, with great views throughout. We walk along the river and also take in various other waterways en-route and the history that relates. The first section of the tour is a circular walk that takes in the Prime Meridian, the 02, an impressive monument to settlers and the Thames’ only lighthouse. We then hop on a DLR to get us to a picturesque basin, where we see the start of a couple of famous canals. We also see the oldest aqueduct in the world, before heading for leafy, watery, historic Wapping. We see the first of several very old quaint pubs and another scenic basin, and then it’s into the woods to see some old ships that aren’t quite what they seem. We then stroll along a cute canal and see evidence of the old docks. There’s even pirate history down here and an amazing view of Tower Bridge, before we see imposing, beautifully renovated old warehouses. 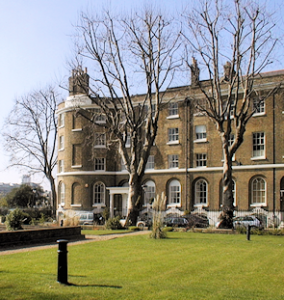 Wapping is one of the most charming, old and historically interesting places in London to walk around, yet is rather off the beaten walking tour track. We hope to put a stop to that. We start at the viewpoint of JMW Turner’s Fighting Temeraire, and tell you the story behind the great painting. We see old Wapping village complete with very early schools, warehouses, gigantic dock wall, old dock basins, a workhouse, an intriguing graveyard, some of the oldest pubs in London and the infamous Execution Dock, where pirates were hanged. These all give a wonderfully evocative feel of old Wapping, plus we bring along early photographs of the area to further enhance the atmosphere. We also see the pub that claims to have once been owned by Turner, as well as seeing the spot where his actual pub really stood.