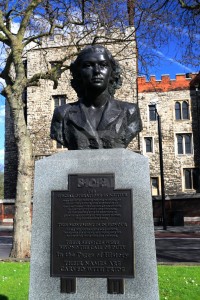 With controversial statues so much in the news these days we thought a walk to have a look at some would be interesting. We start with perhaps the most beautiful statue/memorial in London. And it’s to a great, kind woman. Yet even this has had its controversies. We see a fine memorial to some very brave women. Another important memorial remembers the abolition of the slave trade. Then it’s on to a statue of a great heroine freedom fighter, but some might call her a terrorist? We then see a statue of a Frenchman who taxed the English into poverty to pay for his wars – what’s he doing there?! Then a man who chopped off the king’s head – what’s he doing there?! We finally see statues to a couple of truly great men, but they were very controversial in their time. Then it’s a law-abiding freedom fighter – but a radical might say she was too law abiding! We then see a huge memorial to a racist thug- what’s he still doing there?! Then it’s two great generic memorials to those who gave so much when we most needed them. Then we see the second largest memorial in London – to a useless chinless wonder. What’s he doing there?! Then it’s the oldest statue in London, to a king which was meant to be melted down when he fell out of favour. But it survives courtesy of some dodgy dealings we’ll tell you about. There’s also a statue to a man who said he would never set foot on British soil (oh, and he was also a slave owner) – what’s he doing there?! And that’s him asking! We answer all these questions and pose others for you. We finish where there used to be a great statue of General Gordon sitting on a camel. It’s been replaced by a magnificent statue to a great nurse. Or is it?